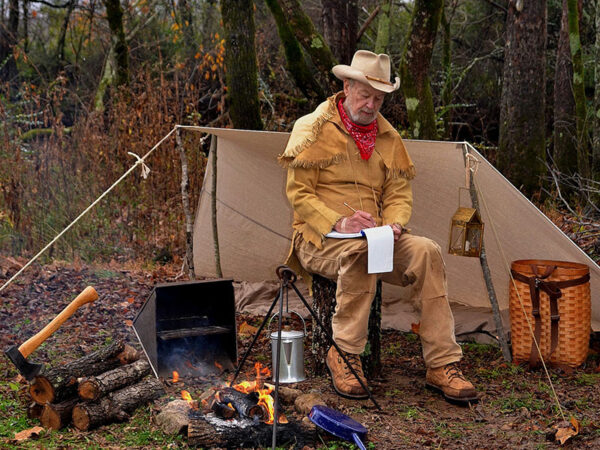 J. Wayne Fears grew up in the Cumberland Mountains roaming around on a mountain named Tater Knob. His dad was a trapper and an expert woodsman, his mom, a country school teacher. From his dad, he learned to live in the wilds; and from his mom, he obtained a love of the written word. When other kids were playing team sports, J. Wayne was spending days, often alone, trapping, hunting and fishing. At the age of 15, he obtained the rank of Eagle Scout. While in high school he joined the Army National Guard. He could not believe the government would furnish him ammo to shoot. Following high school graduation, he served in the U.S. Army.

After graduating from Auburn University, J. Wayne went to work as a wildlife specialist with the University of Georgia to develop the wildlife resources in a rural test county in South Georgia. The resulting program was published as a feature article in the March 1966 issue of Outdoor Life magazine. This article gave J. Wayne and his work national attention and introduced him to the world of outdoor writing.
The following year, he took a similar job with the Coastal Plain Planning and Development Commission working with nine counties. At the same time, he began writing for outdoor magazines, had a weekly radio program and a syndicated newspaper column.

By 1970, he was in graduate school at the University of Georgia working on his Master’s degree and working with Safari Systems, Inc. which gave him North and South American experience. While in school, he was writing for 11 outdoor magazines.

Since completing his graduate work, he has held a number of wildlife related positions and worked as an explorer. He spent a decade as the chief wildlife manager for Gulf States Paper Corporation. Here he was responsible for the wildlife management and law enforcement on 500,000 acres of forestland, the development of Westervelt Hunting Lodge, big game hunting operations in Colorado, Alaska and British Columbia.

In 1982, he left Gulf States to establish a company called Alabama Backcountry Lodges, Inc, which developed and operated three hunting lodges in Alabama. When the company sold, he became a full time freelance magazine writer and book author. He established a consulting company, Fears & Associates, to do wildlife habitat management and exploration work.

In 1994, Progressive Farmer magazine, the nations oldest and largest farm/ranch magazine asked J. Wayne to work for them as the Editor-in-chief of Rural Sportsman, a wildlife management magazine within Progressive Farmer. He retired from this position in 2005. Soon, he came out of retirement and became the editor-in-chief of Hunting Camp Journal magazine and later Hunt Club Digest.

Currently he serves as shooting columnist for the NWTF Turkey Country magazine and feature writer for American Frontiersman and The New Pioneer magazine. For the past decade he has written a column for Whitetails Unlimited magazine entitled The Food Plot Doctor. He also freelances to a number of other publications and web sites.

J. Wayne has had over 6,200 magazine articles published and 34 books. He is often a guest on popular outdoor TV programs and is a frequent speaker at outdoor events. Currently he is working on three books.

Some Magazines in Which Work Has Been Published: