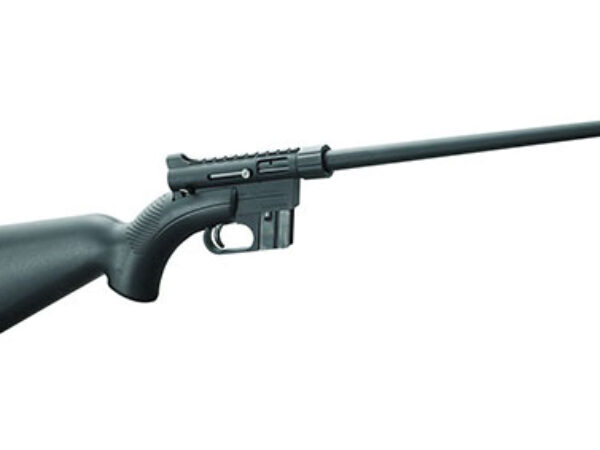 If compactness is a major requirement for your pack then you will want to take a hard look at one of the longest running semi-auto packable survival rifles in U.S. history. It is now known as the U.S. Survival AR-7, made by Henry Repeating Arms. AR-7 was introduced in 1959 as a packable survival rifle for U.S. Air Force pilots. It has flown all over the world in military survival kits and has saved lives. Over the years the civilian version AR-7, a semiauto in .22 LR, has been known for its compact size, ease of operation and reliability and it is still one of the leading rifles to include in survival packs. When broken down into its four component parts, the receiver, barrel, and magazine stow in the hollow stock. The stock with components stowed is just 16.5-inches long and weighs 3.5 pounds. The magazine holds 8 rounds and the rifle can be assembled in less than one minute.

This is one tough rifle as the stock is made from ABS plastic and the barrel and receiver are coated with a layer of waterproof Teflon. I know of several hard core coon hunters who swear by the AR-7 and it is the only rifle they carry in their packs. I have one that is several decades old and has been with me on many adventures and it is still accurate and dependable. It fits into my day pack with ease. My sons, years ago, swore by the AR-7 for coon hunting and woods rambling. I still keep one with me in my ATV and it comes in handy regularly.

One of the best survival experts I know is Medrick “Sgt. Pop” Northrop. He not only knows survival but firearms as well and has a ton of experience with the AR-7. I ask him for his comments on this packable rifle.

AR-7 Choice of an Expert

“AR 7’s appear to be making a comeback with Henry having the latest offering. I don’t get on many firearms related Blogs as my tolerance for reading BS is much less now than it was before I got “old”. Anyhow while searching on-line to order another magazine for one of mine, I managed to click on one about accessories for the AR 7, and then followed it to a number of other ones which mostly centered around making “improvements”, or correcting what they think as errors in design etc. of the AR 7. Anyhow, the intent of this rifle was its designed use as a “Survival” tool. It floats, all parts fitting within the butt stock, and is handy as hell. I received my first one in early 80’s and periodically carried it duct taped under my canoe seats, stashed in my pick up, bungee corded to my tractor roll bar, stuffed in a duffle bag in the Brooks Range, and on occasion, with just the barrel attached to the receiver, carried it in a clothes bag or wrapped up in a coat or sleeping bag in lieu of a handgun while staying in places that I felt more comfortable with it, than without.

I noticed a number of folks putting on collapsible stocks, folding stocks, modified pistol grips, extended magazines, barrel shrouds, scopes, and various attachments that make it look like something a futuristic SWAT team might carry, all defeating what I consider the AR 7s best virtues, simplicity and function. I went as far as pricing some of these accessories and in a short time came up with accessories totaling in cost that far exceeded the price of a new AR 7. In fact with the cost of the accessories and the initial cost of a new AR 7, they could have bought whatever firearm they were trying to create for whatever purpose, and it would probably work better.”

“Although I can imagine one making a “fun” project out of the AR 7, I can’t imagine doing it myself as I’m satisfied with the ones I have in their original configuration. Yes, they both have the trigger pull from hell, but the trigger is simple, works, and most replacement parts could be made with scrap metal pieces, drill, file and/or Drimmel tool. If I need something more accurate, I would grab one of my Ruger MKII Targets, or something of that order.

The AR 7 is what I take when I don’t think I’ll need a firearm, but might, in conditions that that might otherwise be unfavorable for carrying something else.  I have two, both Charter Arms, and the only problem I ever had with either, was when I tried using synthetic extended magazines, several as matter of fact, and had trouble feeding with both. I taped a leather belt shot-shell pouch on the stock of one of mine, which carried two original steel mags and two Dramamine bottles filled with .22 LR and a few .22 CB or shorts ( have to be fed by hand) and a small Opinel knife. Anyhow the point I guess I’m trying to make, before you get caught up in accessorizing/customizing your AR 7,  Remember why you bought it, and the fact it does exactly what it was intended to do better than anything else like it out there.  My humble opinion, yours may vary.” Sgt. Pop

Like Sgt. Pop said the AR7 now made by Henry Repeating Arms, www.henryusa.com is making a comeback. Be sure to give it serious consideration for your must have gear.