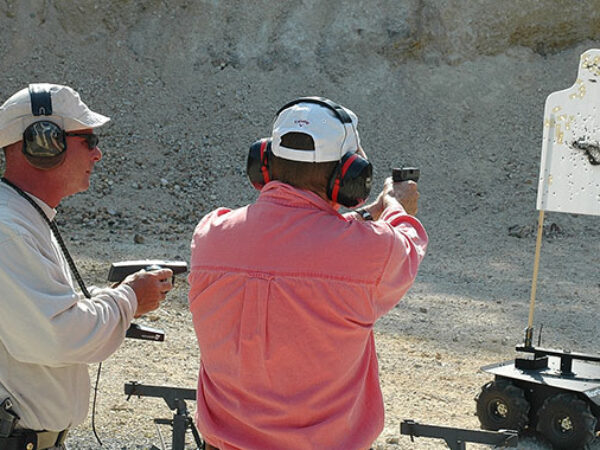 More likely if there should be a threat to you and your family on your rural property it will be from professional thieves, drug induced bullies, disarranged people, or the human predators that live among us, no matter where we live. While it is unlikely you will ever encounter any of these types it is your responsibility to be able to protect your family until 911 response gets to your farm. That is the reason for articles such as this. Plus there is a lot of satisfaction, and self-confidence, in knowing you are well trained to handle your handguns safely, and effectively in a self-defense situation.

Professional Training is a Must

Like many who have used handguns most of their life, for me that included military and law enforcement experience, I thought I was well trained to handle self-defense situations on my farm and other locations. However, as I spent time on the range with those who had been through recent training by professional trainers I realized that my skills and self defense knowledge were no longer up to theirs. I wanted to be really good at self-defense not just average. I not only wanted to be accurate with my handgun but I wanted to be trained in how to avoid a gunfight and when shooting was justified and when it wasn’t. I wanted to be trained how to make these decisions quickly and how to respond fast and accurately if needed. I sought a professional school that teaches all that and much more with most of the training with live fire.

After a lengthy search I selected the Shootrite Firearms Academy ( www.shootrite.org ) and their two-day Defensive Handgun course. The owner and chief instructor at Shootrite is Tiger McKee. Tiger lives the self sufficient rural lifestyle and he knows the importance of defending love ones and property until authorities arrive. Most important Tiger is one of the best trained self defense instructors in the country as he has devoted much of his life training to be the best self defense instructor there is. He is not a former law enforcement officer or military type who decided to use his skills to make some extra cash. By his design, he set out early to be a professional instructor and he has trained under and worked with some of the best instructors. Also, he has been an instructor at some of the best shooting schools in the country before he opened his own.

Prior to the class beginning at Shootrite students are told what gear to bring and how much ammo they would need. The Defense Handgun course is designed for shooters who have had some basic training with the handgun they are using so we were told to come expecting to shoot about 800 rounds, and that held true. Classes are small and each student has lots of instructor time to help him or her learn advanced self defense skills.

As one might expect the opening session of the class was safety instruction for home, range and fighting. Tiger takes his instruction seriously and it showed as he walked our class through the safety session. This is no course for horse play or those not focused on the subject at hand.

The next session was one I found most interesting, and one that emphasized the seriousness of self defense with a handgun, the “anatomy” of the gunfight. Tiger used real gun fighting statistics to show things like how a gunfight is usually at close range, usually 5-7 yards, it occurs in low light, often with multiple threats, and it occurs in a short span of time. He taught us that gun fighting is 90 % mental, that is it is problem solving at high speed. In a gunfight you are the only thing you can control and that is where your training and skills makes the difference.

Following this, there were classroom sessions on the elements of marksmanship, manipulation of handguns, handling malfunctions, when to shoot and when not, avoiding gunfights, using distance, concealment and cover, how to handle yourself after it is over if you are involved in a gunfight. Many of these new skills we would use on the range over and over.

A full day and one half was spent on the range, using live fire to teach gun fighting skills. All shooting was done at close range and under the ever watchful eye of Tiger. Starting with marksmanship drills we progressed to targets that required fast thinking as to shoot or don’t shoot. All drills were done from a holstered gun and we quickly saw how valuable it was to have a practiced system to use when getting into a fighting position. Where to shoot an adversary was emphised – center mass, pelvic and frontal face – were drilled over and over with a variety of targets. Training on what is going on around you was non-stop. Threats may come from any direction.

As we developed shooting skills we were taught the use of our command voice to stop a threat. It could in many cases stop the need for a gunfight. Tiger taught that we shoot to stop a threat, to save life, not take it. As the shooting increased we learned how to change magazines without taking our eyes off the threat and how to handle malfunctions quickly without loosing control of the situation. Drills were conducted where our pistols were loaded with dummy cartridges that caused malfunctions unexpectedly and we were expected to handle it correctly and quickly. As we improved and picked up new skills we were taught to communicate while in the fight, to work with a partner in the fight using verbal communication.

The final part of the class was learning to shoot on the move and, using a robot target, learning to use your command voice to get the target to either respond to your commands or to advance and be shot. When the robot came at us at the speed which a man can run, it was an eye opener as to just how fast and how accurately you must shoot to keep him off you.

When I completed the course I realized just how much I needed this class. I had just thought I had the skills necessary to defend my rural family, if it became necessary. Now I knew the right way to prepare for that event that we all hope will never occur, but if it comes, I will be ready. Much of what I learned at Shootrite I now practice on a regular basis and I am working to hone those skills to become even better at self defense shooting. Perhaps the most valuable part of the class is to learn the skills so that you can practice correctly to become really proficient.

I wrote Tiger when I returned from the Handgun Defense course that it was the best $400. I had ever spent. I was serious. I recommend professional training for all who seriously plan to defend their loved ones and property if the event should ever occur.

Tiger McKee has written a book that is a collection of material he gathered during 10 years of intensive firearms training, both as a student and as an instructor. It is entitled The Book of Two Guns – The Martial Art of the 1911 Pistol and AR Carbine. It is a 172 page paper back that are the handwritten notes and illustrations McKee made while studying under the masters of self defense shooting. It is a no-nonsense book full of self defense shooting principles, techniques and tactics to use with the 1911 style handgun and the AR carbine. I have found it a valuable training reference as I practice the art of self defense shooting. The book sells for $24.95 at www.shootrite.org.