BANNOCK THE BREAD OF ADVENTURERS 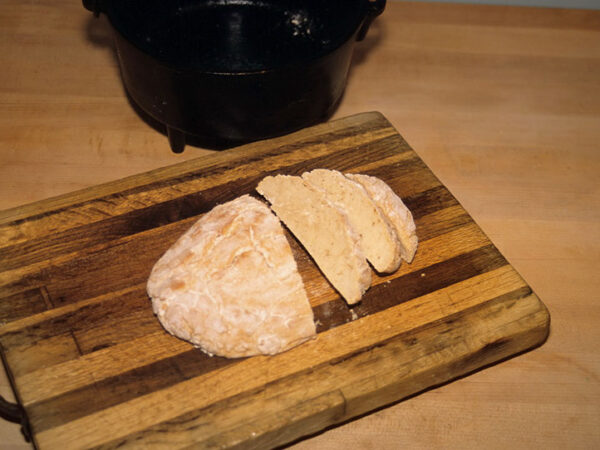 Up in the North Country the seventeenth-century French-Canadian voyagers opened up the wilderness from the St. Lawrence River to northwestern Canada with their trapping and trade operations. These great canoeists traveled vast distances on light rations. One of their main staples was bannock, a simple bread of European and Native American descent.

The European version of bannock is said to have originated in Scotland and was made traditionally of oatmeal. The Native American bannock of pre-contact times was made from flour ground from natural substances gathered from the woods such as acorns, cattail heads, plant bulbs or corn. The first European explorers brought their version of bannock with them and between the two cultures bannock was the bread of the wilderness. The French voyageurs called it “galette”, the Scotch bannach, others called it bush bread, trail bread, fry bread and grease bread. Bannock, from the Scotch word, stuck.

From early history until today those who spend much of their time in the backcountry depend upon this simple but delicious bread. I learn to love bannock while exploring the Arctic where it was a staple of every meal. I brought the modern bannock recipe back to Alabama to cook in my home. It became a hit with all who tried it and remains a favorite in my house and when I am in the backcountry.

The following is how to make modern bannock. The mix is given here in one-person proportion. It can be mixed in advance and will stay fresh for several weeks if kept in a sealable plastic bag. Since this is good trail bread it can be easily carried in a pack.

Add enough cold water to the bannock mix to make soft dough. Mold this rapidly, with as little handling as possible, into a cake about 1 inch thick and lay into a hot cast iron skillet. Bake at 425 degrees until golden brown, about 20 minutes.

The reason for handling the bannock as little as possible is that when the liquid is added to the dry mix, it releases gas from the baking power. The gas causes the dough to rise. Rough handling can cause the gas to escape, leaving you with flat, hard bread. It is worthy to note that cold water releases the gas much more slowly than warm, giving you more time to form the bread and get it into the pan.

If you like bread with a lot of golden brown crust then form the bannock batter in the form of a doughnut with a large hole in the center.

Once the bannock is in the hot skillet, place it over hot coals until crust forms on the bottom, and then turn the loaf over. Now prop the skillet at a steep angle in front of the fire so that the loaf will receive a lot of heat on top. When it looks golden brown, test it for doneness by sticking a twig in the loaf. If dough sticks to the twig, the loaf needs to cook longer. After you have cooked bannock awhile, you will learn to tap it with your finger and gauge by the hollow sound when it is done. It usually takes about 20 minutes to cook.

It is of interest to note that bannock can be cooked the same way in the home fireplace. During a recent power outage we enjoyed bannock cooked in the fireplace.

Early in my outdoor career I spent some time in the Cassiar Mountains of British Columbia with some of the best backcountry guides in the business. Several were Native Americans and they would cook a simple bannock that was outstanding in flavor. Here is their recipe for a one-person serving, double for two and so on:

They would quickly mix the batter while a spoonful of moose fat was melted in a hot cast iron skillet. Then the batter would be poured in and shaped to look like a big pancake. As soon as the loaf was firm it would be tossed over lightly and the other side would be browned.

Here is a bannock recipe from the Cree Indians of Canada.

In a medium sized mixing bowl, combine the flour and lard together by hand. Then add the baking power, salt and berries or fruit. Next add the cold water and work the ingredients into dough. Spread the dough out into a 16 inch square cake pan. Bake at 425 degrees for about 20 minutes or until golden brown.

To cook over a camp fire, divide the dough into four equal lumps and firmly wrap each lump around the end of a four-foot green stick and prop securely over the fire until golden brown.

Many of the Cree Indians I have camped with cook their bannock by pressing the dough flat and cutting into long 1-inch wide strips. They wind these spirally around a four-foot long green stick and hold the bannock twist over a bed of hot coals, turning the stick so that the bread browns evenly.

The bannock mix can be used for pancakes, dumplings, cakes, pie or cobbler crust and rolls. It is an easy bread to have in camp regardless of whether you are cooking on a stick, modern oven, Dutch oven, reflector oven, cast iron skillet or sheepherders stove. 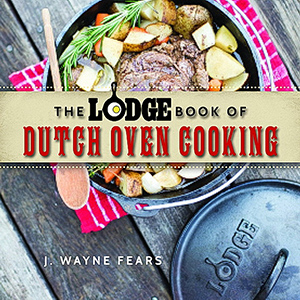